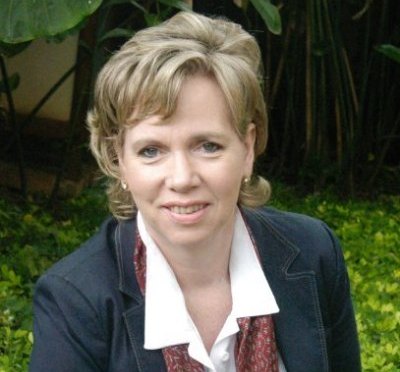 Gene is the Division Manager for Residential Tenant Representatives at Colliers International, helping newly repatriated expats navigate the property minefield in Jakarta. With the Internet boom in the late ‘90s, Gene and her partner Danielle Surkatty created the very popular expat website Living in Indonesia, a site that today averages 95,000 unique visits a month. Gene talks to us about her work, personal life and frustrations with the government’s negative attitudes towards expatriate workers.

How did you end up on the shores of this archipelago?

After I completed my University studies in the US I was in a serious relationship with an Indonesian gentleman. Our visas were expiring so he suggested that I come to see Indonesia. I took him up on the offer and later we were married and raised our family here in Jakarta. Thirty years later I am still experiencing Indonesia.

You’ve been working for Colliers International since 2010, helping incoming expats find suitable housing, as well as helping with orientation upon arrival. What do you love about your job?

When I first arrived in Indonesia I was not aware that there were companies such as Colliers that offered assistance and guidance to expats. Knowing how difficult it was for me and how many misunderstandings I had experienced, I am grateful that now I can share my ‘harder found’ experiences with others so that they can avoid some of the mistakes that I know that I made, but also give them a heads up in what to expect during their posting here in Indonesia.

What challenges do newcomers experience when trying to face the property market without expert help?

Indonesia is one of the few countries in the world that requires the entire rental amount for the full term of the lease to be paid in advance. Because of this, it is sometimes difficult to have the landlord be responsible for repairs or maintenance after they have received the lump sum in advance. Therefore, it is highly advised that the house be properly audited prior to the handover and move in to determine if there are any major problems that need to be repaired. It is our responsibility as a property expert to make them aware of these types of issues and share our local expertise of the communities so they can make an educated decision when choosing a residence for their family.

What’s the first thing you tell new expats who approach you looking to relocate here?

Many of our clients are very apprehensive when they first arrive because they have heard or seen a lot of negative media in their home countries regarding Indonesia, mostly regarding the level of safety for their family. I tell them unfortunately there is not a perfect place to live and sadly terrorism is happening in many other places in the world. I assure them that if they keep an open mind towards their posting that I am confident they will grow to love the people that they meet here and most likely – at the end of their posting – be sad to leave.

Have you noticed a decline in the number of inbound expats to Indonesia?

The number of work permits that have been issued to expats in Indonesia has actually been in decline since 2011. Over the last 12 months we have seen a noticeable decline, not only in the numbers of expats coming into Indonesia, but also the length of time that the work permit is issued for. Undoubtedly the world decline in the oil and gas industry has been a factor as there is a large foreign presence in this sector, however government policy towards foreign investment, as well as the ponderous protocol that is needed to set up a new company, is making initially interested parties turn to neighbouring countries that are more welcoming.

What are your thoughts on recent comments from Mirah Sumirat from Indonesia’s Association of Trade Unions regarding the influx of foreign workers, where she said, “This threat is no joke … [workers] from the United States, South Korea and India must be looked at too.”

The number of foreign workers issued work permits in Indonesia in 2015 was 69,025.This number is not even 1 percent of the total number of people working in Indonesia! How can this possibly be a threat to Indonesian workers?

I would like to point out to Ibu Sumirat and other government officials that in most cases foreign workers actually create jobs for Indonesians. In almost all cases an expat is hired in middle to high management positions where there is a severe shortage of local talent and these expats are tasked with improving the quality of work or product in their industry to try and bring these levels up to a global standard.

Although expats we work with are often impressed with the level of work that is being done in many multinational offices, almost always there is need for improvement so that Indonesian offices can be more competitive with the global market. Often the position will be turned over to a national after being mentored by the expat.

It saddens me to see that currently incoming expats are facing some of the most difficult immigration processes that we have seen over the past several years. Indonesia will continue to fall further and further behind in both talent and product development and deter foreign investment if government decision makers do not realize the many advantages that expats can share. Why not take advantage of learning and sharing knowledge from experts of other countries to expedite the development of Indonesia?

In 1997 you were part of starting the very popular expat site www.livinginindonesia.org. Can you tell us the story behind the site’s creation?

In 1997, my partner Danielle Surkatty and myself were involved with the American Women’s Associations publication – helpful books for expats who are living or planning to move to Indonesia. We often heard that once the expat found the book, which could be three to six months after arriving in Indonesia, they expressed it would have been so much more helpful if they had the information earlier on or even before their move to Indonesia.

We realized that through the Internet it was going to be possible to get the helpful information to many more people and in a timely fashion. We were both long-term expats, so our aim was to help provide a source of information on a wide range of topics that would help expats who are moving to or living in Indonesia.

We actually started the site with five pages of information. Now it is over 1,000! Changes are made to the site daily and I am very excited that we are currently working on a new design that we hope to be launching in 2017.

You are known for your involvement in the Jakarta Players Community Theatre group. What is it about this extra curricular activity that gets your blood pumping?

I have always been interested in the arts and theatre but never had the time to participate until my children were grown. When I was first cast in a production I was so fascinated with how a script came to life through the performance of the cast. Regardless of how small a part might be, every member of the cast is necessary to complete the production. Each member interacts with others to tell the story and it is so rewarding to see the response of the audience.

Can you share any insights into life as a mixed marriage couple?

Any marriage is going to be full of compromises. A mixed marriage is no different, however there are even more issues as you will be faced with not only two different personalities but two different cultures. Both partners will need to have respect for each other as well as their respective cultures and families and also have a very open mind and be willing to accept that you agree to be different.

What’s the biggest positive change you’ve noticed over the years in Jakarta?

The ease that you can communicate with people around the world; my first years in Indonesia took me one month to get a letter from Canada!

If you were president for a day, what would you do?

Schedule a meeting with Immigration, Department of Manpower, Association of Trade Unions, and any other government officials that are involved with foreign investment with the Chambers of Commerce such as AmCham, BritCham EuroCham, IKONID, and open a dialogue to point out the huge advantages that expats are currently bringing to Indonesia. I would like to emphasize that the pros far outweigh the cons; these foreign experts can help nationals develop Indonesia. I would hope this would be one of the first steps to changing some of the negative attitudes of government officials that continue to hinder the needed growth and development of this country.

Thank you, Gene! To get in touch, please email: genesugandy1@gmail.com